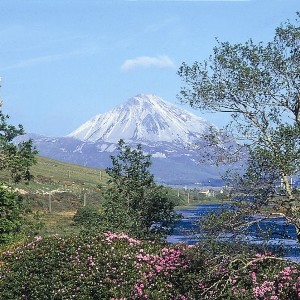 Donegal in the northwest tip of Ireland inspires a fierce loyalty from both natives and visitors alike.

It is one of the last bastions of the Irish language and there are Gaeltacht areas scattered throughout the county, home to some 30,000 native Irish speakers.

Thousands of people travel from across the world every year to stay in the Gaeltachs and learn the language.

There is also a strong tradition of music in the county and it has produced international acts such as Altan, Clannad, and Enya.

The county takes its name after the town of Donegal (Dun na Ngall in Irish) which was founded by the Vikings in the 9th century, however, the ancient Irish name for the county was Tir Chonaill, the `land of Conaill’.

Ballyshannon is home to one of Ireland’s best folk festivals and attracts musicians from throughout Ireland and further afield. Every pub and street corner has a sessiun and you can still see people dancing at the cross roads.

Catholic Pilgrims flock to Lough Derg every year for days of prayer and fasting. The Nobel Prize winning poet Seamus Heaney, described his experience at Lough Derg in his Station Island collection.

Glencomcille is a Gaeltach area where thousands come to learn Irish among its native speakers every year, surrounded by hills and, bogland and sea, the land here almost seems to breath the language.

Further north is Dungloe, immortalised in the song Mary from Dungloe, and the Rosses, another strong Gaeltach area, while just of the coast is Aranmore Island.

Bloodyforeland takes its name from the reddish glow of the rocks when the sun sets on a summer evening and is set against the backdrop of the magnificent Derryveagh Mountains.

At the most northern tip of Ireland is the Inishowen Peninsula where there are numerous historic relics surrounded by a landscape of rugged beauty and spectacular coastal scenery and the Gaeltach island of Tory.