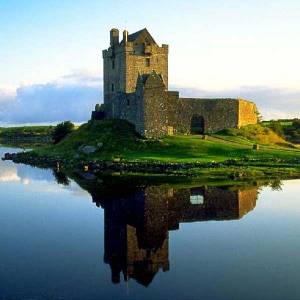 Galway is probably one of the most romanticised counties in Ireland and justifiably so, few places in the world can boast such a beautiful and unspoiled rugged countryside.

Galway city itself is one of Ireland’s most cosmopolitan cities, but with a distinct Celtic twinge. Twisting cobbled streets are home to traditional bars and restaurants nestling next door to chic boutiques selling everything from Paris fashion to hand knit Aran jumpers.

Boats leave the city every day (weather permitting) for the Aran Islands, home to the famous sweater, traditional curragh fishing boats, and a community of native Irish speakers.

The largest island Inishmore was made famous by the 1932 film Man of Aran and was the birth place of the novelist Liam O’Flaherty. The playwright JM Synge also spent a lot of time on the islands collecting folklore.

Back on the mainland a journey through Connemara is almost and essential part of any visit to Ireland. Words do little justice to this isolated region of mountains, bogland, rugged coast and an occasional whitewashed cottage.

The village of Cong on the shores of Lough Corrib was the setting to the John Ford picture The Quiet Man starring John Wayne and Maureen O’Hara. Visitors can go on tours of the main locations featured in the film.

The Connemara National Park is home to a stunning array of plant life, falcons and merlins, red deer, badgers and foxes, all in their natural environment.

Up in the north of the county is Clifden, which is much less fussy than Galway city. This fishing town has some good bars and restaurants and is close to some great coastal walks and the absolutely incredible journey along the Sky Road.