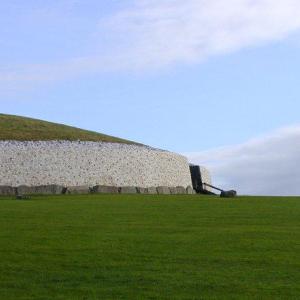 This county has many of Ireland’s most historic sites, with some monuments dating back to well before the first Celtic settlers even set foot on Irish soil.

The engineering feats required to build New Grange were no less remarkable than those of the pyramid builders, with over 200,000 tonnes of stones and rocks used to build the burial mounds.

The people who designed and built New Grange obviously had an intimate grasp of astronomical data, because on December 21st every year, the winter solstice, the sun shines along 60-foot passageway and directly onto a central recess in the burial chamber.

There are similar mounds along the Boyne Valley at Knowth and Dowth dating from the same period, although these have not been reconstructed to the same extent as New Grange.

The Bru na Boinne Interpretive Centre is close to the mounds and helps explain the building techniques used and some insights into the long forgotten people who built them.

Meath is also home to the Hill of Tara from where the High Kings of Ireland once ruled the country and where remains of their palaces and courts can still be seen.

The town of Kells is perhaps most famous for being the place where Christian monks wrote and lovingly decorated the Book of Kells whose art work is the inspiration behind much of modern Celtic design.

Slane Castle is home to one of Ireland’s best-known rock festivals and over the years it has played host to Queen, Bob Dylan, David Bowie and the Rolling Stones.