The Province of Leinster (Laighin) 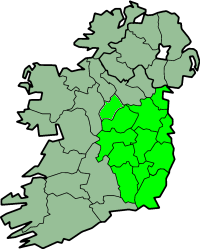 Although the territorial divisions they embody are very ancient, the Irish provinces have never been used as administrative regions, and for the most part, do not inspire the same kind of allegiance as counties or parishes. Virtually the only area in which they now have everyday significance is sport, particularly Gaelic football and hurling, where the championship are organised first within and then between the provinces.

Leinster is the most easterly of the Irish provinces, and includes counties Carlow, Dublin, Kildare, Kilkenny, Laois, Longford, Louth, Meath, Offaly, Westmeath, and Wicklow.
Its name derives from the Laighin, a Celtic tribe which was part of the earliest wave of Celtic invasions of Ireland, and which ruled the area now covered by counties Carlow, Kilkenny and Wexford. The modern province also includes the territory which was part of the ancient fifth province, Míde.

Although the high-kings of Ireland ruled from Tara, virtually none of them had undisputed authority, and bloody internecine warfare was constant throughout the province for centuries. It was a dispute between Dermot MacMurrough, king of Leinster, and Rory O’Connor, then high-king, which led to the invitation to the Anglo-Norman barons to join in. MacMurrough has understandably been vilified by later Irish nationalists, but the Normans were perfectly capable of arriving without an invitation and would undoubtedly have got around to it eventually anyway.

In the nineteenth century, Leinster was already the richest and most populous province, which meant it was spared the full brunt of the Famine and the later depopulation through emigration. It retains that position of relative wealth today, with a large conurbation centred on Dublin, but extending into the neighbouring counties of Wicklow, Kildare and Meath.