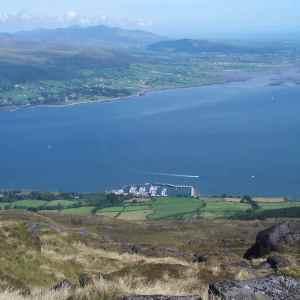 Louth is the smallest county in Ireland and probably one of the least visited, although like everywhere else in the country is has its own unique charm.

The north of the county runs along the shores of Carlingford Lough and Carlingford town has some good pubs and restaurants specialising in locally harvested mussels.

Behind Carlingford are the Cooley Mountains, the setting of ancient myths and legends about Cuchuliann and the Red Branch Warriors and made famous in the story about the `cattle raid of Cooley.’

The County has two major towns, Dundalk and Drogheda, both of which can become quite congested with traffic travelling between Dublin and Belfast.

Dundalk is a lively town and is home to the Corrs, one of Ireland’s best known and photogenic pop groups.

Drogheda sits at the mouth of the River Boyne. The city fell to Oliver Cromwell in 1649 and local folklore is still full of tales about how his armies massacred thousands of people, although some historians dispute this.

St Peter’s Church is the final resting place of St Oliver Plunkett who was hung drawn and quartered in 1649… his embalmed head is still on display!!!

A few decades later in 1690 the Louth became the scene of one of the most historic battles in Ireland when the armies of King William of Orange and King James fought the Battle of the Boyne.