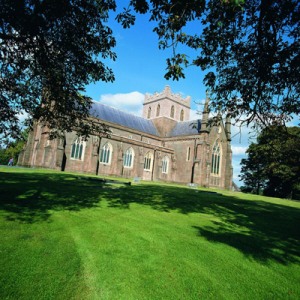 Armagh city is the ecclesiastical capital of Ireland and is home to the heads of both the Catholic Church and the Protestant Churches.

The city owes its Christian heritage to St Patrick who is said to have built a stone church in 445AD on the hill where the Church of Ireland Cathedral now stands.

Close to the centre of the city is the St Patrick’s Train heritage centre which tells the story of the city. It also pays homage to Dean Jonathan Swift, a native of Armagh and the author of Gulliver’s Travels.

The County of Armagh is seeped in heritage. Two miles to the west of the city is Navan Fort which played a central part in the myths and legends surrounding Cuchulain and the famous Red Branch Warriors.

A heritage centre close to the site of the fort retells these myths and also takes visitors through the archaeology of the region and what historians have learned about the culture, rituals and beliefs of Celtic Ireland.

The county is also home to some superb scenery in and around the Slieve Gullion, boasting rugged hill tops, lush forests and an inland lough.

Creggan Church Yard, near Crossmaglen is home to some of Ireland’s best known Gaelic poets. A worthy local toursim initiative is the Ti Chulainn Cultural Centre in Mullaghbawn where traditional music and the Irish language are fostered.