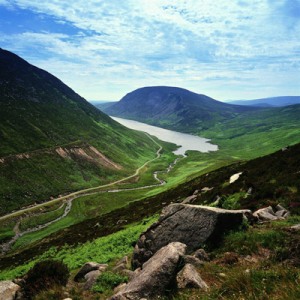 County Down where the Mountains of Mourne sweep down to the sea, where St Patrick began his ministry, and where the Bronte sisters had their family roots.

The north of the county runs into Belfast and includes the isolated Ards Penninsula where Ulster Scots traditions thrived until recently.

Cultra is home to the Ulster Folk and Transport Museum, where houses, shacks and schoolhouses have been carefully restored to allow visitors to experience everyday life from past centuries.

Strangford Lough has an abundance of wildlife and is home to Castle Espie, one of the north’s best nature reserves, and on its shore you will find ancient Nendrum monastic site.

County Down is seeped in the legend of St Patrick and close to the county town of Downpatrick is Saul where the Saint built his first church in Ireland. Downpatrick is said to be his final resting place and a heritage centre is due to open in 2001.

Further south is Newcastle where the Mournes do actually sweep down to the sea and where visitors can enjoy long mountain treks or leisurely strolls along the shore.

The coast road sweeps along scenery reminiscent of the wilds in the west of Ireland to the fishing port of Kilkeel and beyond to Carlingford Lough.

On the shores of the Lough there is the magnificent Kilbroney Forest Park and there is a strong tradition of folk music in Rostrevor and Warrenpoint.

The border town of Newry is one of the largest towns in the north and one of the fastest growing industrial regions on the east coast of Ireland.

North of Newry, towards Belfast is Banbridge and the nearby Bronte Interpretative Centre which pays homage to literatures three most famous sisters, whose father was born nearby.