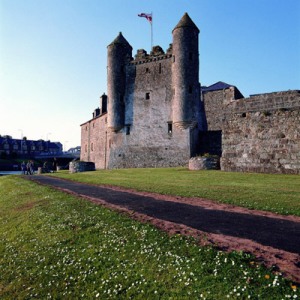 The rivers and lakes of Fermanagh are heavy with fish and Lough Erne has claimed many world coarse angling match records.

The trout and salmon fishing is good too – so good in fact, that the locals tend to ignore the coarser kind – and the whole region is highly developed for fishing.

The intermittent barking of a raven from the limestone cliffs or an occasional visit from a circumspect whooper swan is likely to be the only encounter of the non-piscatorial kind because Fermanagh is still wonderfully empty of crowds.

If you are not fishing or cruising or enjoying the water in one way or another there is plenty to do in Fermanagh. Major attractions are the Marble Arch Caves which includes an underground boat trip on a subterranean lake and exploration of stalactites and stalagmites in these underwater caves.

The origins of the island town of Enniskillen go back to prehistory when this short nexus was the main highway between Ulster and Connaught. Enniskillen Castle was the medieval seat of the Maguires, chieftains of Fermanagh, who policed the lough with a private navy of 1,500 boats.

Today the castle houses the county museum which contains exhibits and an audio-visual program on the region’s natural history, archaeology and folklore.

Enniskillen is home to Protora Boys School which numbers writers Oscar Wilde and Samuel Beckett among its former pupils.

The Belleek Pottery factory provides visitors with a close-up look at the firing, glazing and decorating of this world-famous porcelain. Belleek was established in 1857 and its craftspeople still employ 19th century techniques.