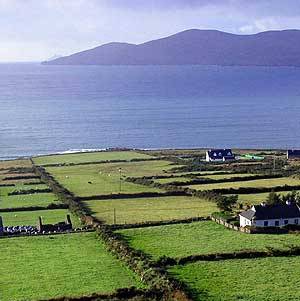 Kerry man jokes have contributed to a minor publishing industry in Ireland, but any Kerry man will tell you that the jokes are down to pure jealousy from those who do not have the privilege of living in this magnificent county.

What other region could boast the Lakes of Killarney, the Skelligs and Blasket Islands, the Ring of Kerry, an international beauty festival, and the Dingle Peninsula?

Killarney is fairly central to the county and is a good base to explore from. The busy town has plenty of shops, pubs and restaurants and is within easy access to all the county’s major attractions.

The nearby lakes have dozens of ruined castles and abbeys on their shores which run in to lush green countryside.

In stark contrast the Skelligs are high rocky outcrops jutting out of the Atlantic Ocean and would at first sight appear to be totally uninhabitable, but that didn’t put off a group of sixth century monks.

Led by a hardy contemplative called Michael the monks built a cluster of six beehive cells and two oratories on the largest of the Skelligs.

The popular memoirs of Michael O’Sullivan in Twenty-Year-A-Growing and Peig Sayers in An Old Woman’s Reflections, a depressing book written in Irish which weighed heavy in many an school bag, have given the Blaskets a literary mystique which attracts many visitors.

The islands were only abandoned by their last native residents in the middle of the twentieth century, but there are still regular boat trips back and forth.

The Ring of Kerry is simply stunning and has some of the most spectacular mountain scenery you are likely to encounter anywhere in the world.

Tralee is famous the world over for the annual Rose of Tralee competition.

Out on the Dingle Peninsula the Brandon Mountains serve as a backdrop to superb coastal scenery and a seeming endless array of hidden antiquities.