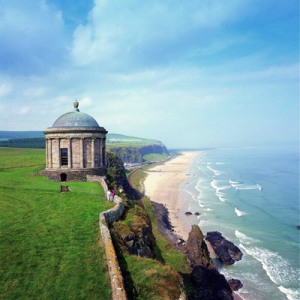 The story of Derry city is a long and tumultuous one. Set on a hill on the banks of the Foyle estuary, strategically close to the open sea, it came under siege and attack for over a thousand years.

St Columb came out of Donegal to escape the plague 1,400 years ago and founded his first monastery in the oak grove (Doire in Gaelic), a gift from his cousin, Prince of Aileach. It was a holy place. The saint said that ‘the angels of God sang in the glades of Derry and every leaf held its angel.’

You can walk along the great 17th-century walls, about a mile round and 18 feet thick, which withstood several sieges and even today are unbroken and complete, with old cannon still pointing their black noses over the ramparts.

The city’s most famous siege took place in 1689 and lasted for 105 days. It is still commemorated by Northern Ireland Protestants to this day.

The modern city preserves the 17th-century layout of four main streets radiating from the Diamond to four gateways – Bishop’s Gate, Ferryquay Gate, Shipquay Gate and Butcher’s Gate. Historic buildings within the walls include the 1633 Gothic cathedral of St Columb. In the porch is an inscription:

At the time of the plantation of Ulster in the 1600s, the City of London sent master-builders and money to rebuild the ruined medieval town and gave it the name Londonderry.

County Derry boasts some fine scenery, including the Sperrin mountains and a series of long sandy beaches along the shores of Lough Foyle and jutting out into the Atlantic.

Major towns include Limavady and Coleraine where there is a university, although the student population tend to life in the nearby seaside resorts of Portrush and Portstewart.

The village of Bellaghy is the birth place of Ireland’s poet, Seamus Heaney, and there is an interpretative centre dedicated to the Nobel prize winner and his work.