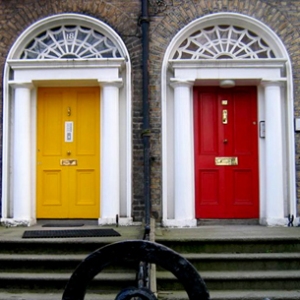 The capital of Ireland and one of the most vibrant cities in Europe, Dublin can be a bit of a shock for first time visitor who may be expecting something more rural.

In the north side of Dublin is O’Connell Street, which is the widest street in Europe and is home to the General Post Office where the 1916 Rising was begun, sparking the war for Irish independence.

At the southern end of O’Connell Street is O’Connell Bridge which runs over the River Liffey and into the more bohemian south side of the city.

Grafton Street is the place to be seen, it is a fairly narrow pedestrianised street full of buskers, tourists and ordinary Dubliners going about their business.

The streets surrounding Grafton Street are coming down with shops, restaurants, cafes and bars, where you are as likely to mingle with people from Boston, Bangkok, Brisbane or Barcelona, as someone from the Dublin suburb of Ballymun.

Check out the Palace Bar in Fleet Street where Brendan Behan once drank and wrote. O’Donoghues in Merrion Row, is where the legendary folk group the Dubliners used to play and drink and is still home to some fine music sessiuns, while and in Poolbeg Street is Mulligan’s, reputedly a former watering hole of JF Kennedy when he lived in Ireland.

The manic nightlife is in Temple Bar, which has dozens of pubs and clubs and is literally heaving with people during the weekends.

The city is coming down with tourist attractions, including Dublin Castle, Christ Church Cathedral, Kilmainham Gaol where the leaders of the 1916 Rising were executed, the Guinness Brewery where you can see the famous stout being brewed and sup a few pints straight from the keg. On the northside is the Customs House, Phoenix Park and Croke Park, home to Gaelic Football and Hurling.

One of the most exclusive areas in Dublin is Killiney, several miles to the south of the city centre and overlooking Dublin Bay, in these wooded hills you will find the homes of Bono and other members of U2, Enya and film director Neil Jordan.

James Joyce is probably one of Dublin’s most famous sons, although he spent most of his life in exile. A whole tourist industry has developed around Joyce and his most famous novel Ulysses, which is set in Dublin.

There are walking tours around the city to the main locations where Ulysses was set and on June 16, called Bloomsday after the novel’s central character Leopold Bloom, many of the episodes are reinacted.