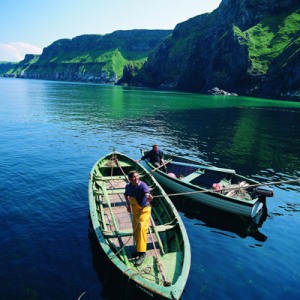 Antrim is home to one of Ireland’s most famous landmarks, the Giant’s Causeway, said to be built by the giant Finn McCool.

The biggest annual event in the county is the Oul’ Lammas Fair in Ballycastle. In the old days it lasted a week when there was plenty of match-making as well as horse-trading.

Just off the coast from Ballycastle is Rathlin Island, with an abundance of bird life and a single pub.

Back on the mainland you will find Dunluce Castle and the dramatic Carrick-a-Rede rope bridge, which as its name suggests is a bridge made out of rope (look down if you dare).

Inland slightly is the world famous Bushmills Distillery, home to one of Ireland’s best known exports.
The Glens of Antrim find twisting roads running through forested hills and boglands that are never far away from some of the most spectacular coastal scenery in Ireland.

From one of these harbours, it’s said, sorrowful Deirdre and the sons of Uisneach embarked for Scotland to escape the wrath of King Conor.

Antrim town lies close to Lough Neagh, the largest inland body of water in Ireland, where fishermen still row out to fish for eels.