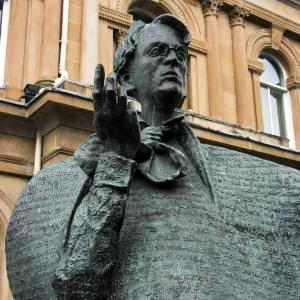 Think Sligo, think William Butler Yeats. He is by far the county’s most famous son and it has become a place of pilgrimage for devotees of the Ireland’s greatest poet.

The table top mountain of Ben Bulben dominates much of the County’s skyline and is just one of many landmarks commemorated by Yeats in verse.

On his gravestone at Drumcliff is the self penned epitaph: `Cast a cold eye on life, on death. Horseman pass by.’

As well as the landscape, Yeats was inspired by Sligo’s history and mythology and rewrote many ancient tales to create much of his early, and most widely read, poetry.

Queen Maeve of Connaught, who appears in many Irish myths and legends, is reputed to be buried on Knocknarea Mountain beneath a 60ft cairn.

Other ancient sites worth visiting are the Carrowkeel site in the Bricklieve and the Carrowmore megalithic site near Sligo town.

The town itself pays more than a passing tribute to its most famous son and other members of his family, including his father John and brother Jack Yeats, whose paintings have become major collectors items.

The County Museum and Arts Gallery, the Yeats Memorial Building and Sligo Art Gallery all pay tributes in various ways to the various members of this precociously talented family.

A major literary event each year in Sligo is the Yeats International Summer School, which includes readings, lectures and performances of WB Yeats work.