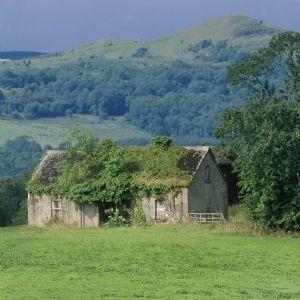 There are nearly one thousand standing stones in County Tyrone, a testament to the Stone Age people who passed through the county over the centuries.

Apart from Omagh, the county town, Cookstown (famous for its sausages) and Dungannon the landscape is almost empty of men but rich in prehistoric and Celtic remains.

Well known neolithic sites here include the Beaghmore stone circles near Cookstown which were uncovered only 40 years ago, and the chambered cairn of Knockmany at the top of a steep wooded hill north of Clogher.

If you are interested in this period, the Ulster History Park near Gortin Glen Forest Park is well worth a detour.

From the seventh to the 12th century, crosses and High Crosses went up all over Christian Ireland and there is a superb example of this peculiarly Irish art, 18-l/2 feet high, at Ardboe. Another, not quite so tall, stands at the top of the main street in Donaghmore village.

The chief crowning place of the Tyrone O’Neills was Tullaghoge Hill where there is a fine view of the old kingdom of Tyrone from the top. The crowning took place, it’s said, ‘amid the clang of bucklers and a hundred harps’.

The Ulster American Folk Park at Camphill, Omagh, pays tribute to the mark the Irish made on north America and in particular the Ulster Scot Presbyterian settlers of the 18th century.

Near Strabane, is the ancestral home of Woodrow Wilson, 28th president of the US. The farm is still occupied by Wilsons, who will show callers round the house.