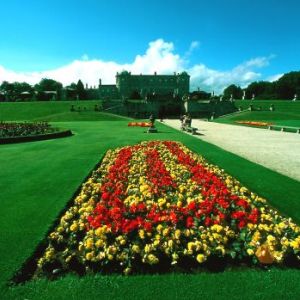 While enjoying the solitude and tranquillity of the Wicklow Mountains it is hard to believe you are just a few miles from the bustling centre of Dublin.

The mountains stand as a backdrop to the south of the city and can occasionally be glimpsed between the buildings of a busy city street.

A must for any visitor to Wicklow is Glendalough, where the conical towers of ancient Celtic churches, stand on the shores of two loughs in a rocky mountain valley.

A monastic settlement was founded in the valley by St Kevin in the sixth century and flourished there for more than 600 years as a centre of learning and healing. Even following its decline, Gelndalough remained a place of pilgrimage until the 1800s.

The Wicklow Mountains are popular with hikers and it is easy to see how an isolated mountain road with a single tree could have made such an impression on the young Samuel Beckett that he eventually used it as the setting for his masterpiece, Waiting for Godot.

The Wicklow Way will take you through the heart of the mountains and past some stunning scenery, although it is not essential to walk all 81 miles to get a full flavour of the countryside.

Wicklow town became popular with the English lords who ruled much of Ireland from the 16th century and was once part of the Pale, an English stronghold centred around Dublin.

The county is dotted with country mansions and stately homes formerly owned by its overlords, set in lush green countryside.

South of the county town is Brittas Bay, which has one of the best beaches in Ireland and stretches for three miles and runs to Arklow.