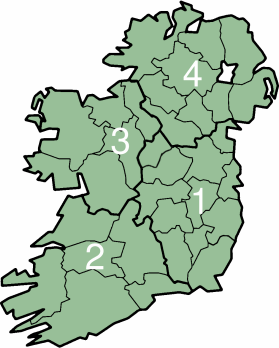 When under Gaelic rule, Ireland was divided into provinces to replace the earlier system of the tuatha.

Originally there were five provinces but over the course of time the smallest one, Meath, was absorbed into Leinster. During Ireland’s golden age these provinces were little more than loosely federated kingdoms with somewhat flexible boundaries, but in modern times they have become associated with groups of specific counties though they have no legal status.

The provinces were supplanted by the present system of counties after the Norman occupation in the twelfth century. The Irish word for province, “cúige”, means “portion” and/or “fifth”, reflecting the original division.

The four provinces of Ireland are;