The Province of Ulster (Ulaidh) 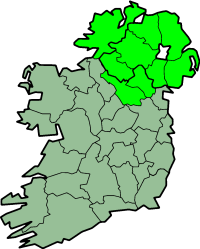 Ulster is the most northerly of the four historic provinces. It consists of counties Antrim, Armagh, Cavan, Derry, Donegal, Down, Fermanagh, Monaghan and Tyrone. Although the name is now often used as shorthand for Northern Ireland, three of its counties, Cavan, Donegal and Monaghan, are part of the Republic of Ireland.

In the earliest known division, the province covered a slightly different territory, excluding much of what is now Cavan and coming as far south as Louth. The capital was situated at Emhain Mhacha, outside Armagh.
Attacks from its southern neighbour Mide (Meath) in the fourth century AD broke it up into smaller kingdoms: Tír Chonaill covering most of Donegal; Tír Eoghain covering most of modern Tyrone and Derry; Oriel which included Monaghan, Louth and Armagh; and Uladh which, although claiming the name of the province as a whole, in fact only incorporated the north-eastern counties.

The Normans managed to settle along the east coast from the twelfth century, but the power of the O’Neills and O’Donnells remained intact elsewhere in the province until the seventeenth century when the final collapse of the old Gaelic civilisation led to the Plantation of Ulster and a massive influx of settlers from Scotland and England.

The first great mass migration from Ireland to North America took place from Ulster in the eighteenth century and consisted of the descendants of the Scottish settlers seeking refuge from economic and political hardship and religious intolerance.