The Province of Munster (Mumhain) 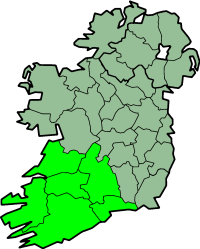 Munster is the most southern of the provinces, consisting of counties Clare, Cork, Kerry, Limerick, Tipperary and Waterford. Its name derives from a pre-Christian goddess, Muma. Like the other provinces of Leinster and Ulster, the full English name incorporates the original Gaelic, together with the Norman suffix “-ster”, which is related to the modern French terre, meaning “land”.

In the divisions used before the arrival of the Normans, the province was divided into two, the northern kingdom of Thomond and the southern kingdom of Desmond, with the border running through the Slieve Luachra mountains.
For centuries the Munster Eoghanachta dynasties – later to acquire such surnames as McCarthy, O’Sullivan and O’Connell – fought intermittent wars with the high kings based in Leinster, and with the O’Briens. After the coming of the Normans their power waned and the Butler and Fitzgerald families dominated the north and south of the province respectively.

Apart from the large towns of Cork, Waterford and Limerick, in the nineteenth century Munster was still a predominantly rural region, with a wide variation in prosperity, from the relatively fertile and wealthy areas of south Tipperary and east Cork, to the bare subsistence levels along the Atlantic coast in south Kerry and west Cork. It was these latter areas that suffered most in the Famine itself and in the great emigrant depopulation which followed.