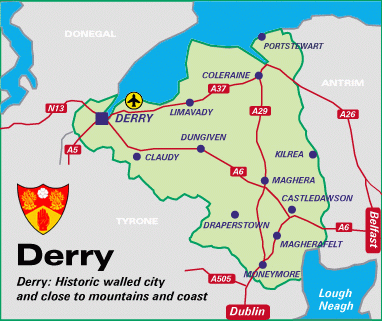 County Derry (Doire in Irish) is one of the six counties of Northern Ireland. It was named for its main town (later city and administrative centre), Derry (later Londonderry), and the Plantation of Ulster by London livery companies.

Unlike the town, historically there was not a preceding County Derry: it was established by combining the former County of Coleraine with small parts of Counties Antrim, Donegal, and Tyrone at the behest of the London companies so that they could control both banks of the mouths of the rivers Foyle and Bann and have access to sufficient wood for construction.